Anaplasmosis: Your Guide to This Tick-Borne Disease 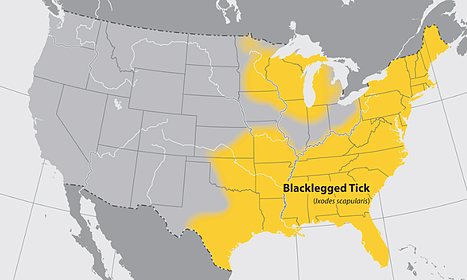 Anaplasma phagocytophila (formerly Ehrlichia equi) is a tick-borne disease which causes Equine Granulocytic Ehrlichiosis. This non-contagious disease is transmitted by the deer tick or blacklegged tick called Ixodes scapularis. (In western states it is also transmitted by Ixodes pacificus, the western blacklegged tick.) Small rodents such as white-footed mice, chipmunks, voles, and shrews, as well as white-tailed deer and possibly birds act as intermediate hosts in the lifecycle. Dogs, humans, and horses are incidental hosts. Any age or sex of horses can be affected, but horses younger than four years old seem to exhibit less severe signs.

Common signs may include:

There are several different testing options for anaplasmosis that involve bloodwork.

Treatment may vary depending on the severity and other considerations, but generally would include a tetracycline antibiotic. Oxytetracycline administered intravenously once daily for about 5 days will generally result in a rapid and effective response. Doxycycline or minocycline given orally for a longer period can also be effective but typically has a much slower response rate. Horses undergoing treatment should be carefully monitored for side effects.

No vaccine is currently available. At this time, the best prevention is targeted towards multifactorial tick control. Many products, such as tick leg bands and UltraBoss, can be used. In addition, environmental control is very important and may include keeping pastures mowed, trees pruned, and leaf litter to a minimum. It also helps to keep horses tails shorter than grass height and to decrease secondary hosts such as mice and shrews.

If you have any questions regarding the above information or your horse is displaying any of the signs listed above, please call us at (608)592-7755, we would be happy to discuss further.

Free Shipping On All Orders!

Latest News From Our Blog